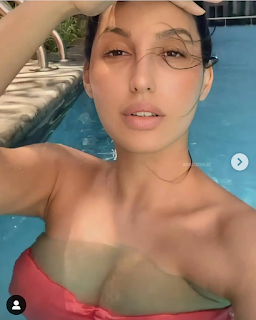 Bollywood News: Bollywood's best dancer and actress Nora Fatehi has captivated the hearts of fans on the strength of her talent and beauty. Nora is often seen entertaining fans by sharing her stunning pictures and bold videos. Along with this, the viral video related to him (Nora Fatehi Viral Video) is also seen grabbing the attention of the people very well. In this episode, the actress's pool video (Nora Fatehi Pool Video) has become a hit on the internet, seeing that the fans are once again convinced of her hotness.

Nora Fatehi's pool video has been shared on one of her fan pages. In which she is seen setting fire with her hotness in the water wearing a peach colored bikini. During this, Nora's no makeup look has been seen, as well as she has been seen having fun with her hair. A friend of the actress has also appeared in the series of these pictures and videos.

Nora Fatehi's video has become viral on social media as soon as it comes out, and till now it has got more than 1 thousand 500 likes in the Instagram world. Commenting on this, a user writes, 'Hi! Summer', another wrote, 'She is our queen.' At the same time, while asking another question, he writes, 'Who is this boy after all?' Similarly, giving great reactions to the post, fans have been seen dropping an emoji with heart and fire.

Talking about Nora Fatehi, these days the stars of her career are at the peak of heights. The project in which the actress puts her hand becomes a hit. Along with this, she also knows how to be in the headlines with her fashion sense and style. Nora is followed by 32.9 million people on Instagram, and is seen showering love on each of her activities.

Falcons vs Buccaneers Prediction and Odds: Tom Brady to laun...

Bengals vs Chargers Prediction and Odds:  Bengals to win